It doesn’t matter if you’re at Main Park or at one of Mammoth Mountain’s beginner-friendly terrain parks, you’re going to see someone doing spins off of jumps.

The reason why you’ll see experts, beginners, and even people on groomed runs doing spins is because they’re a rare breed of trick that in their simplest form are beginner friendly but can be built upon until only professionals can land them. Whether you’ve only set your eyes on a 180 or plan on practicing your spins until you can land a 1260 or beyond, the ASO Mammoth Guide to learning how to spin below will start you out on the right foot!

Before reading any further, we should make it clear that you should never attempt a trick, in this case a spin, that you’re not ready for. Some people may handle their nerves by fully committing to a trick on their first try, but we always recommend staying safe by taking gradual but calculated steps towards landing your first spin.

The first spin that you’ll want to master is a basic 180.

Fortunately, 180s are simple enough to practice on groomed runs if you can get enough pop out of your ollie. The first step is to make sure the run you’re practicing on is clear of other skiers and snowboarders. We recommend having a spotter who will keep an eye out for others on the mountain. If you’re a snowboarder, you’re going to start off with your backside 180, while skiers can start by spinning towards their right.

Either way, you’re going to end up riding switch so make sure you’re comfortable with switch riding before you attempt your first 180. 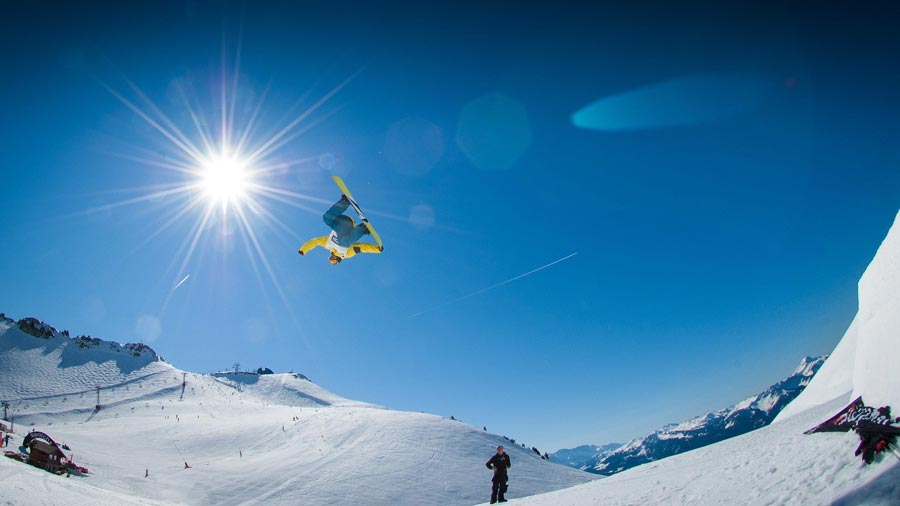 Skiers Spot their Landings, but Snowboarders Spot Their Takeoff

The next steps depend on whether you’re skiing or snowboarding.

Snowboarders will want to keep their board flat and weight mostly centered with a slight lean on their toes. Next, snowboarders will spot where they plan on jumping, glue their eyes to it, and jump off their toes while keeping their eyes focused on that spot. Then it is time to open up your hips and pull your front hip uphill before landing flat on your board.

For skiers, the process begins by spotting where they’re going to land and keeping their eyes set on it. Keeping a visual on the landing is important because skiers land backwards and will need to know what their landing looks like and where they’re going. After spotting the landing, skiers simply need to ollie and rotate their feet and hips 180 degrees before landing flat on their skies while looking downhill over their shoulder.

Get the Speed Dialed In

Once you’ve mastered 180s, you’ll be able to push towards doing 360s off jumps in the park if that’s your next goal.

After getting the hang of hitting a jump and popping off a lip, you can begin by figuring out just how much speed you’ll need to complete your rotation and land smoothly. You can do so by practicing straight airs and watching other riders while paying attention to what speed lands where.

Use Your Run Up to Spin Off Your Edge

Once you have your speed dialed in, you can practice the path towards the lip of the jump that will allow you to jump off the edge needed to complete your rotation.

This will take time and practice, so be patient as you get comfortable with the exact carving technique that will set you up perfectly to land a 360.