How to Protect Your Ski and Snowboard Gear on the Mountain

HomeSkiingHow to Protect Your Ski and Snowboard Gear on... 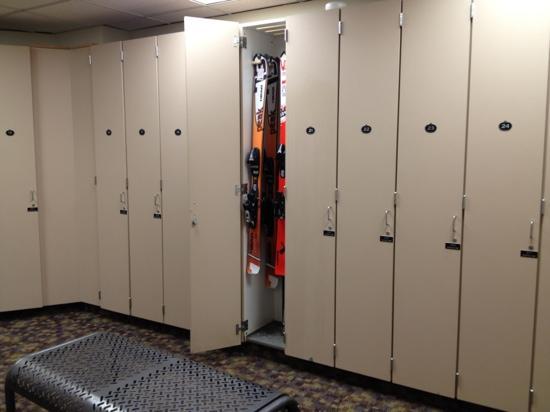 You would rather buy new ski or snowboard gear because you wore it out instead of having it stolen or damaged while on the mountain, right?

Here at ASO Mammoth we know that the answer is yes because there is nothing worse than losing a beloved piece of gear through circumstances that were completely avoidable. Just about anything is possible on a ski mountain, but our guide below for protecting your ski and snowboard gear while on the slopes will lessen the chances you come into our shop brokenhearted!

Although they’re not necessary for every break you take on the mountain, the best way to prevent ski or snowboard theft is by storing your gear in a locker when you take a long break.

For the unfamiliar, ski mountains set up racks outside of their lodges and restaurants on the mountain so skiers and snowboarder can lean their snow-covered gear against them while they go inside to eat or rest. These racks rarely ever have locks on them, so it’s possible for a thief to spot a setup they like and walk away with it.

Most ski mountains also have lockers near the snow available for rent though that are perfect for storing skis and snowboards while on a long break. If you’re visiting Mammoth, click here for more information on their lockers available for rent.

Buy a Lock or Separate Your Skis

You can rest your skis or snowboard on the racks safely by either buying a lock such as this one. How effective these locks varies by brand and price, but at the end of the day they’re bound to make your gear much less attractive to a potential thief.

Another simpler anti-theft solution is to swap out one ski with a buddy so that when you store your skis they’re mismatched. No thief will want two completely different skis, nor will they want to take the time to search through hundreds of skis in order to find a ski’s partner.

Now that we’ve covered how to prevent ski and snowboard theft, we can talk about preventing damage.

One of the places you would never expect damage to occur is in the lift line, but we’ve seen it happen. When skis and snowboards collide in the lift line, the damage is usually a scratch at worse. This can occur when someone shifts in line without looking where they’re going, but if someone enters a line too quickly then a collision could cause severe damage. Whether you’re  standing in line or riding towards one, realize that you must be extremely cautious around stationary people.

Under the right conditions, ice can be invisible on the slopes. If you hit it unexpectedly or in the middle of a turn you could not only fall but could slide into another rider or natural feature like a rock or tree.

You can prevent sudden falls from ice by wearing the right eyewear for cloudy days and staying aware of the day’s conditions.

Be Alert of Other Skiers and Snowboarders on the Slopes

The biggest risk involved with skier and snowboarder collisions is physical injury to the riders, but after all the snow settles the gear involved could also be seriously damaged.

If you’re on a crowded run or are making a wide cut across a slope, always look over your shoulder to make sure your path is clear. Remember, the best way to avoid collisions that damage your body or your gear is by riding defensively!