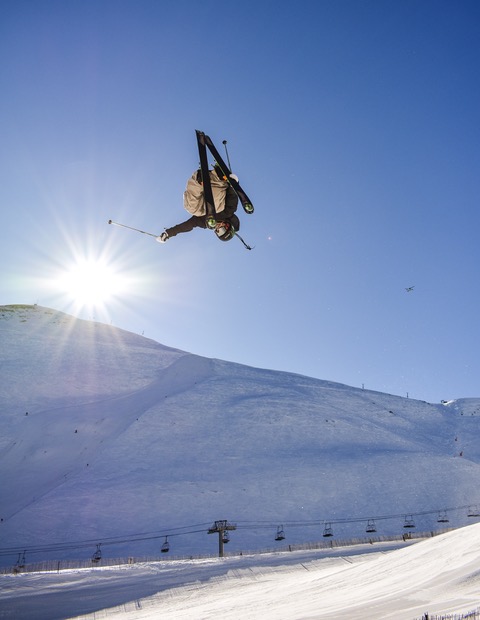 Heading to the Terrain Park at the End of the Ski Season? Here’s What You Need to Know.

When spring weather brings slush snow and low coverage, the terrain park is the place to be at Mammoth Mountain or any mountain for that matter.

Check it out before you head to one of Mammoth Mountain’s many terrain parks and then stop by ASO Mammoth for the best ski and snowboard rentals and gear in Mammoth Lakes!

Communicate With Those Riding Around You

One of the most important parts of riding in the terrain park is communicating with those who you are sharing the park with.

Once you’re past the first few features, you’ll be riding according to the flow of the park and those around you. When you’re at the top of the park though, it’s all about making sure you have a straight shot at the first feature and will not be cutting anyone off.

People in Front of You Have the Right of Way

Once you’re past the first feature, skiers and snowboarders will be trying to ride between features to enjoy the flow of the park. Of course, you won’t be able to communicate with other skiers and snowboarders if they’re not stopping, so the best way to ride safely through the park is by letting whoever is in front of you have the right of way.

You should still check over your shoulder before approaching a jump or rail to be safe, but in general the downhill rider always has the right of way.

One of the unique parts of riding through the terrain park during spring is how slushy snow affects takeoffs and landings for rails and jumps.

If you’ve skied or snowboarded on slushy snow, then you know how much it can slow you down. When it comes to landing and jumping, slushy snow can make a huge difference since it may alter how much speed you need to hit a feature as well as how soft your landing is.

If the snow is slushy, take a few extra runs to dial in how fast you’re moving on it. You can also wax your gear with temperature appropriate wax to make sure your gear is ready for the snow.

Don’t Stop Underneath Rails or Jumps

Just like when you’re anywhere else on the mountain, you must not stop anywhere that you cannot be seen from above while in the terrain park. It’s dangerous for you and the people above you, so always stop on the side of the trail if you must stop.

Even if you can be seen by skiers and snowboarders higher up in the hill, you shouldn’t stop beneath or near jumps, rails, or any features in the terrain park. You can’t hit a feature until it is completely clear of other riders, so always keep them clear.

Ride in the Park that Matches Your Skill

Lastly, you should never ride in a terrain park where you don’t have the skill to hit the features. It’s unsafe for yourself as well as the other people in the park, so start in the beginner park if that’s what matches your skill and watch other riders in the larger parks from the slopes and lifts!