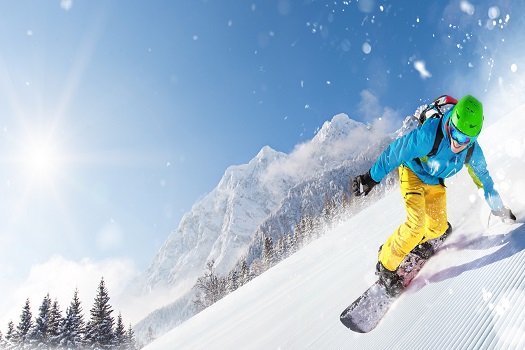 There’s been a debate for many years about whether skiing or snowboarding burns more calories. Here, we’ll dive into this subject and address the key factors that point to the favored activity for losing weight. The snow sports experts at ASO Mammoth—the premier place for gear, equipment repair, and ski and snowboard rental in Mammoth—break down the workouts you’ll get on your skis and your board.

There are many factors to consider when determining which snow sport burns more calories. Some estimates say skiing burns approximately 500 calories, while snowboarding burns about 450 calories. These are rough numbers, and there are no comparison studies. Experts believe it’s likely a toss-up. There are so many factors to take into consideration. For example, are the individuals skiing and snowboarding for the same amount of time? Do they weigh the same? Do the slopes they’re on have the same level of difficulty?

According to research, beginner skiers generally catch on easier and usually fall less. As a result, they don’t spend so much energy getting up over and over again. Snowboarders of all levels usually spend more time on the ground than skiers. Before snowboarders begin runs, they have to sit down to strap on their boards. They then get back up to start their runs down the slope. Essentially, they’re doing pushups at least once every run. This type of workout doesn’t occur with skiing. However, in comparison, snowboarders get less of a workout than a skier on a flat area. On flat terrain or uphill, skiers tend to propel themselves with their poles. This type of workout targets the upper body as well as the core and legs because of the cross-country motion. When new skiers start from the bottom of the hill and head back up to the lift, it can be exhausting due to the unexpected hiking involved, especially with their skis strapped. Snowboarders are more inclined to unstrap and carry their boards.

It’s been noted by a competitive skier and snowboarder who partakes in both sports that the effects from both activities can be felt on different muscles. When it comes to skiing, the muscles that tend to be targeted are the glutes and the outer muscles of the hips. In snowboarding, there’s the front-to-back action and balance. This type of movement targets the front of the quads, the calves, and the lower abdomen. If you’re taking up snow sports and are serious about your fitness, consider taking up both skiing and snowboarding. You’ll get the best of both worlds while hitting the slopes, and at the same time, you’ll target different muscles. During an hour-long session, skiing and snowboarding can burn between 300 and 600 calories.

No matter how you choose to hit the slopes, you’ll get a great workout. The best way to try out one or both of these sports is to rent high-quality equipment and get some beginner tips from experienced pros. When you come to Mammoth, ski rentals, boots, poles, snowboard rentals—everything you need to try either sport—are right here at ASO Mammoth, your one-stop shop for all the gear and services you need to have a blast on the mountain. Drop by our shop or give us a call at 760-965-3444.