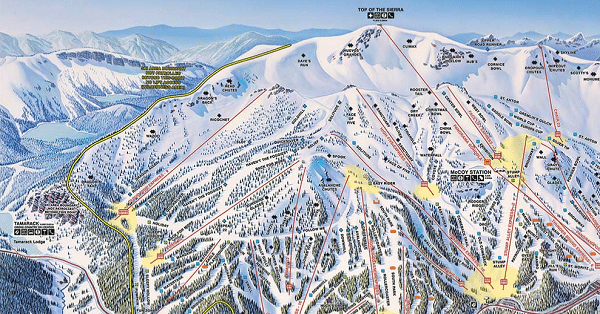 Reading a trail map is generally an easy task even for beginners. As long as you know the color code you can figure out what area is right for you and where to avoid, but there is other information that a beginner skier or snowboarder may not be aware of when checking out a trail map for the first time. In fact, even experienced skiers and snowboarders may make mistakes when reading a map if they’re not familiar with the mountain.

To help you spend more time riding and less time figuring out where to ride, the ASO Mammoth team has put together a few tips to remember when reading a trail map.

Many people see a green run or a black diamond and picture a nearly flat run and a very steep run, but the truth is that difficulty is made of much more than just how steep a run is.

For example, a blue run in the middle of the mountain may turn into a green run without the incline ever changing because the trail widens towards the bottom. Black diamonds may also be as steep as a regular blue run, but if they run through trees or have features like a chute or gully they may be classified as more difficult. While it’s hard to know what makes a run the difficulty it is without actually riding it, always remember that difficulty is determined by more than just the incline so you ride the trails that are right for you.

Difficulty Varies from Mountain to Mountain

If you’re an American East coast skier or snowboarder who has taken a trip out to the American west, then you’ve probably run into a blue run that would be considered a black on your home mountain.

This is because more terrain types and options for other areas on larger mountains gives the resort operations team more leeway in designating their trail difficulties. That’s not to say that all trails out West will be marked differently than they would on the East coast though, because every mountain classifies the difficulty of their runs differently. In general you know what to expect on a green and black diamond, but don’t be surprised if you end up on a very challenging blue or a laid back black when riding a mountain for the first time.

The main function of the trail map is to tell you where to go and which slopes you should take to get there based on your skill level, but after you look at one you’ll realize there is much more to the map than just that.

For example, when looking at the Mammoth Mountain Trail map you’ll see yellow areas, orange circles, and different symbols next to each lift. Knowing that the yellow areas are slow zones where riding at high speed could lead to serious injury, the orange circles are terrain parks, and the  number of people shown in the symbol next to each lift shows how many people fit onto each seat will make a world of difference when planning your day. For example, avoiding a three person lift like Chair 20 in favor of a five person lift like Roller Coaster Express could save you a half hour on a crowded day, so pay attention to more than just the color code on the trail map.

We hope that this guide helps you get to know Mammoth Mountain a little better, but if you still have more questions or need to buy or rent ski and snowboard gear stop by ASO Mammoth on your way in!