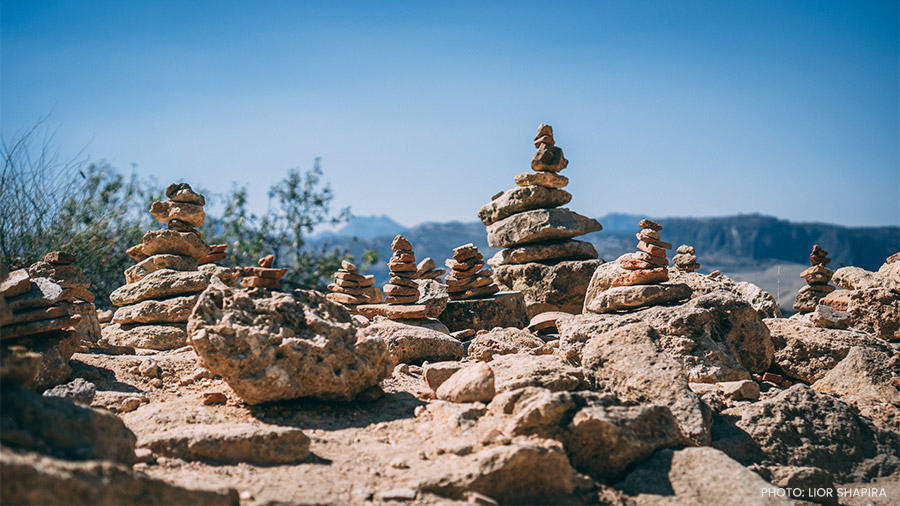 There are plenty of things that can catch your eye when hiking near Mammoth Lakes thanks to the beautiful natural scenery, but there’s also one thing that could catch your eye because it’s unnatural.

Stacked rocks, also known as rock cairns, dot hiking trails, campgrounds, and wildernesses all the way from Florida to Washington state and offer people exploring the outdoors a chance to leave their mark by adding a rock to the cairn. It’s easy to do, you’re not adding anything to the environment that wasn’t already there, and some people even use stacking rocks as a form of meditation.

However, just because you can stack rocks and add to rock cairns doesn’t mean you should. To help you minimize your impact on the Mammoth Lakes wilderness during your next visit, the ASO mammoth team has listed everything you need to know about rock cairns below. Check it out before your next trip and stop by the ASO Mammoth shop on your way to the trail for more local information and outdoor sports gear!

Although the word cairn comes from a Gaelic word, it’s impossible to say who first built rock cairns and why they did it. Rock cairns were used by different cultures all over the world for everything from basic navigation to leaving messages for other explorers and even ceremonial rites.

It’s no surprise then, that as public land sprung up throughout America, the people dedicated to caring for it built rock cairns to mark the trails for themselves and visitors. Even though most trails today are mapped out and marked with directional trail signs, rock cairns are still built by the officials in charge of maintaining public land. Specifically, rock cairns serve as great trail markers in areas that are less traveled like the backcountry, difficult to find a trail in like a dry riverbed crossing, or constantly changing like a desert.

Why You Should Not Add Rocks to a Cairn

As unnecessary as they may seem to most hikers, rock cairns are still an important part of public land. In some places they’re built by the local officials to guide visitors through the area. In others like Acadia National Park, they’re historical monuments which mark the unique history of the park where Waldron Bates built them over a century ago as he explored the area and later advocated for the creation of the park.

Adding one small rock to a cairn seems harmless, but if everyone who passes it does the same thing then the cairn could collapse and confuse people who are using them to navigate. That’s only one reason why you shouldn’t stack rocks or add to rock cairns though.

We’ve talked about the importance of leaving no trace before, but if you’re unfamiliar then the basic idea is to leave as little impact on the natural environment as possible while you’re in it.

Even when used by the people in charge of managing public land, rock cairns violate that policy which is why they’re used sparingly. However, when regular people stack rocks or add on to rock cairns, they not only move rocks which support insects and the wildlife that feed on them, especially near creeks and rivers, they also contribute to erosion. Plus, if a rock cairn collapses then it could not only harm the environment nearby but also visitors down the trail.

Rock cairns are in the wilderness for a good reason, but instead of adding to them or building your own, let the people who manage the land manage them too.