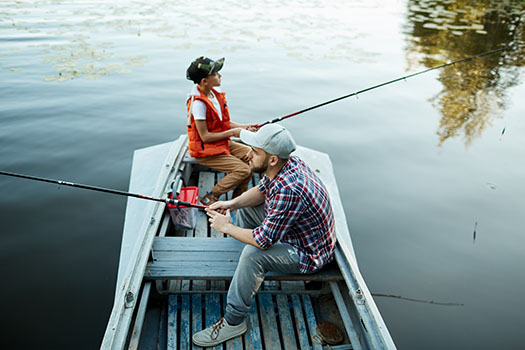 Mammoth Lakes has some of the most scenic fishing in the country. You don’t have to go far in any direction to find a fishing hole, be it a lake, river, or stream. You can bait a hook, sit back, and take in the astounding beauty of Mammoth Lakes. If you really want to catch some fish, there are plenty to be had. Most fishermen at Mammoth Lakes aim for the various types of trout. Several of the lakes are stocked regularly with trout, but there are other types of fish to be found. Here’s a list of the seven types of fish you’re most likely to catch at Mammoth Lakes, brought to you by the friendly folks at ASO Mammoth, your one-stop shop for everything from fishing licenses to hiking gear to Mammoth bike rentals.

Rainbow trout are known for their striking appearance. A clearly visible red stripe along the side of this fish makes it immediately identifiable. Rainbow trout typically weigh 1 to 5 pounds but can grow much larger, especially those found in lakes. The popularity of this fish has led to extensive restocking in the Mammoth Lakes area.

While not as vividly colored as their rainbow cousins, brown trout offer up plenty of excitement for anglers. Originally a European species, brown trout have been introduced to suitable environments around the world, including Mammoth Lakes. Brown trout are both larger and more aggressive than rainbow trout. Some of the largest in the world can be found at Crowley Lake.

If it’s an adventure you seek, trying to locate the elusive golden trout could be your thing. These fish are known to exist in lakes above 10,000 feet in elevation, meaning you’ll have to get off the beaten track to find one. The search will be worth it to many fishermen, as the golden trout is a true beauty worthy of its name.

The brook trout is actually a type of char and is not indigenous to the western United States. These fish do well in cold, clear water, making them a great fit for the streams and creeks in the Mammoth Lakes area.

The perch, specifically the Sacramento perch, is a somewhat rare fish found in the Mammoth Lakes area almost exclusively at Crowley Lake. Spawning season for this perch is late spring and early summer, making it a great choice for summertime angling.

This nocturnal fish is native only to California. It can be found in Crowley Lake and Convict Lake. The scenery at Convict Lake is picture-perfect. The Owens sucker loves insects, making artificial flies a great choice for bait.

If you can find one of these elusive creatures, you could be in for quite a thrill. They can be hard to find in the Mammoth Lakes area, but they offer up a great fight for their size—as much as almost any other fish.

Whether you love to fish, bike, or hike, when you head to Mammoth, stop by and see the knowledgeable staff at ASO Mammoth. Whether they need fishing gear or high-quality bike rentals, Mammoth visitors can find everything they need at our store. Drop by on your way to the lakes or give us a call at 760-965-3444.