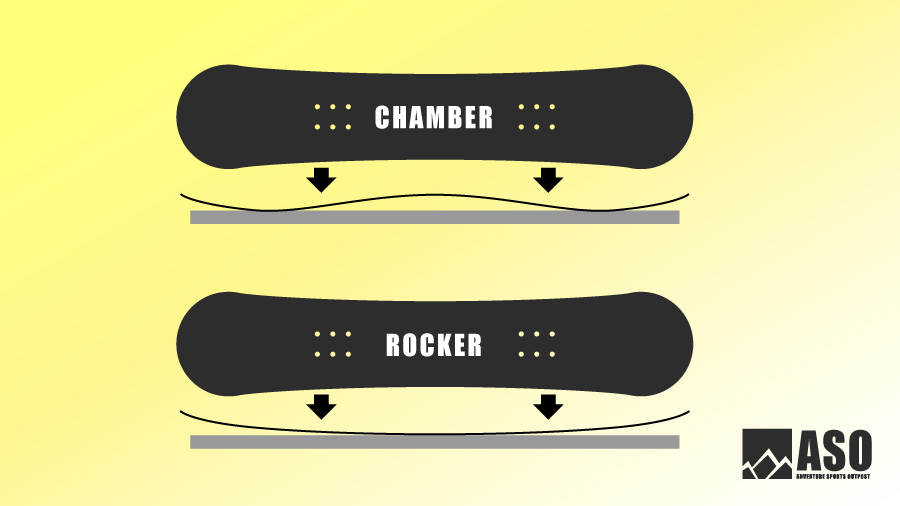 Traditionally, when you look at a snowboard from the side it is flexed down towards the ground near the feet of the rider and arched up between where the rider’s feet should go. This shape is known as a camber.

Rocker boards completely invert this stance by having the tail and nose of the board flex up and away from the ground with the middle of the board arching down, creating a smooth arch. In fact, you can think of the arches on the bottom of a rocking chair for a visual reference for a rocker’s shape.

What does it feel like to ride a rocker board, and should you ride a rocker board? That’s a little more complicated, but fortunately the ASO Mammoth team has broken down the basics of rockers below. Check it out if you’re thinking of buying or renting a snowboard in Mammoth!

Most beginner snowboarders will want to stick to the basics when it comes to the board they learn on, but rocker boards can actually be easier to learn on than a traditional camber.

Once a new snowboarder is able to stand up on their board, their edges catching on the snow will be the most common cause of a fall until they learn to control them. With a rocker’s shape there is less edge contacting the snow than a traditional camber, so beginners may actually learn faster on a rocker board. In other words, a rocker board makes it less likely that a rider will catch an edge and fall when doing spins on the ground, which is why beginner riders learning to control their board are less likely to fall on them.

While less edge contact may mean beginners don’t have to pay as much attention to their edge, it also means that riders have less surface to use to control their board at high speeds.

Your edges are what you use to dig into the snow and turn or slow down, so if you have less edge you have less surface to control your momentum with at high speeds. For this reason, you should always consider learning on a traditional camber so that you learn to control your edge early on.

Rocker Board, Designed to Float Through Powder

If you’re lucky enough to have more than one snowboard, then a rocker board can be a great tool to enhance your riding in the right conditions. One of the best examples of a rocker in ideal conditions is when riding powder.

Rockers actually get their shape from water skis and wakeboards which are designed to float over the water without catching an edge, and that’s exactly what rocker snowboards do in powder.

On the snow this means that you lose less speed while riding powder because the rocker shape allows you to ride on top of the snow instead of through it, reducing resistance and increasing the amount of fun you can have.

Rocker Board, Excellent for Fun in the Park

While less edge contact may make controlling your board at high speeds harder, it also makes having fun in the terrain park easier.

As we mentioned, at low speeds it is easier to spin and butter on a rocker board. For beginners this means more room for error while learning, but for park riders it means more flexibility and room for innovation on rails and other features. For this reason, rocker boards are popular with park riders, and if you love riding the park then you should consider a rocker for your next board!