5 Top Injuries Among Snowboarders & How to Avoid Them 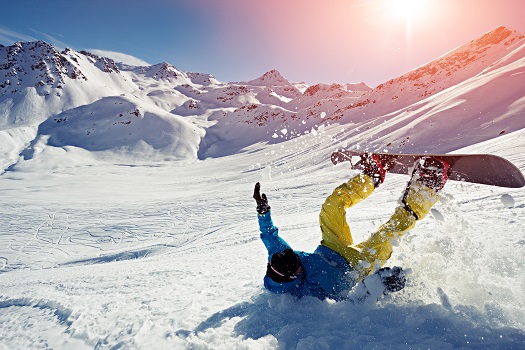 Snowboarding is very popular around the world. However, it’s a high-risk sport, so accidents happen all the time, some of which lead to serious injury. Unlike skiing, in which leg injuries commonly occur, in snowboarding, you’re more likely to injure your upper body. Studies have shown that approximately 60 percent of all snowboarding injuries happen to the arm, wrist, hand, or thumb. Here are some of the most common injuries in snowboarding and tips to prevent them, brought to you by the snow safety experts from ASO Mammoth, the place to go for safety gear, high-quality repair service, and snowboard rental in Mammoth.

Perhaps the most common injury among snowboarders is to the wrist. A wrist break or fracture can be extremely complicated and take longer than eight weeks to heal, which can also increase the chances of long-term disability or some other permanent damage. It’s also really frustrating when you can’t fully use your arm and hand for daily activities while you’re healing. You can best avoid a wrist injury by wearing proper safety gear, such as wrist guards made for snowboarders.

Injuries to the head and face are fairly common and sometimes very serious. They’re often caused by falls or collisions. Snowboarders can fall forward or backward and strike the back of the head. While head injuries are rarely serious, when they are, they can cause death or permanent brain injury. To be safe, wear a helmet to protect your head.

Spinal injuries aren’t common, thankfully, but they do still happen, and the damage can be severe. They’re most often caused by bad landings from jumps or extremely violent falls backward onto the spine. Don’t try any jumps or tricks that seem beyond your skill level, and you’ll likely never suffer from a spine injury.

Snowboarders actually get knee injuries on ski lifts, not just when riding their boards. When you get on the lift, you need to have one foot fastened into the snowboard while you push forward with the other foot, decreasing your chances of a sprain or twist. Also, collisions can cause knee fractures or tendon or ligament damage. A torn anterior cruciate ligament (ACL) is a common knee injury for snowboarders. Using a well-designed modern knee brace can protect you from a knee injury and give you stability to successfully navigate the twists, turns, and jumps on the slopes. Professionals wear knee braces because they know how beneficial they are for safety and performance.

Snowboarders are prone to ankle sprains and fractures (the lateral fracture of the talus has become known as “snowboarder’s ankle”). The lack of support from soft boots is a major reason these kinds of injuries are so common. To prevent such injuries, you can try wearing harder boots. They’ll be less comfortable to use than soft boots but worth it in the long run.

Snowboarding is a fantastic way to enjoy your time on the slopes, so don’t ruin it by getting injured because you didn’t use proper safety equipment. The first step is to make sure you start with high-quality equipment that’s fitted properly. ASO Mammoth is your one-stop shop for Mammoth snowboard rentals, safety gear, and tips from the snow sports experts. We have everything you need to have a blast, including sage advice on how to head home injury free. Drop in or give us a call at 760-965-3444.