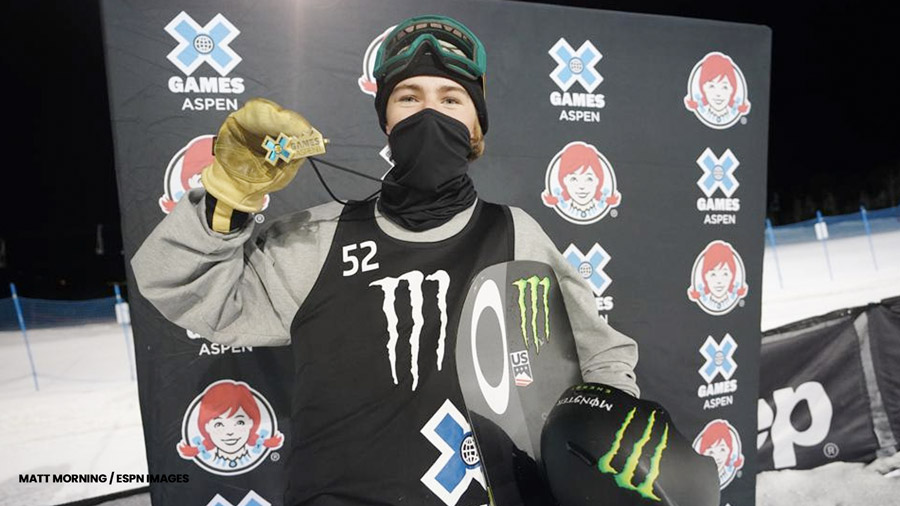 Notable athletes are more common in Mammoth Lakes than just about any town in America, and now there’s another name to prove it. Mammoth Lakes’ Dusty Henricksen Wins X-Games Gold.

Dusty Henricksen stomped his landing onto the national stage this week at X-Games Aspen 2021 to win two gold medals. In both his wins, Henricksen displayed the creativity and ridiculous skill needed to thrive in Mammoth Mountain’s famous Unbound Terrain park, and he was the first American to bring the men’s slopestyle gold medal home in 12 years. Since Dusty’s name is one that you’re going to be hearing often from now on, the ASO Mammoth team has shared a slice of his story below! Check it out and get to know one of Mammoth Lakes’ best!

It takes time for most people to get used to hitting a new feature or jump, but as his performance at X-Games 2021 made clear, Dusty Henricksen is not most people.

Not only was X-Games 2021 the first that Henricksen had competed in, but it was also the first time he had ridden in Aspen at all. Still, that didn’t stop Henricksen from pushing himself during his practice sessions leading up to the competition. Henricksen worked all week to land a switch backside 1260, but was unable to nail down the trick during practice. The backside 1260 may need to be called a “Hail Mary” from now on though, because that’s how Henricksen described attempting it in the slopestyle competition. Of course, he landed it on his slopestyle run that won him his second gold medal of the week.

Henricksen also crushed the Knuckle Huck competition, a contest which itself became an X-games event only a few years ago, where contestants fly, slide, and butter off the lip of a steep incline, or knuckle, as creatively and skillfully as possible. It sounds simple, but there was nothing simple about the Cab 180 into a tail press followed by a front flip Henricksen threw without the benefit of a constructed jump. As impressive as that sounds, it was even more impressive to watch as well as good enough to take home Henricksen’s first X-games gold medal.

Not surprisingly, dropping into new conditions confidently is nothing new for Henricksen. Henricksen started snowboarding when he was two years old in Big Bear California where he was born.

Although Henricksen wasn’t riding quite at a gold medal level when he was five and the last American to win X-Games gold in slopestyle did so, he was well on his way. When he was 12, Henricksen and his family made the move to Mammoth Lakes where his snowboarding progressed enough for him to join the 2020 Youth Olympic team where he would also bring home a gold medal. During the same year, Henricksen made a name for himself when he outscored several veteran riders at the 2020 LAAX Open. Not surprisingly, the event Henricksen medaled in was the knuckle huck.

The people closest to Henricksen likely knew that his future was bright, but after his performance at the X-Games there is little in the snowboarding world that is out of reach. Although Henricksen spoke about how excited he was during the games, his riding looks effortless and smooth, so you’ll likely see plenty of him in edits and films soon and often.

If you’d like to follow Henricksen’s journey, then you can follow him on Instagram, or you can visit Mammoth Lakes for the best skiing in the Sierras and hope to run into him on the mountain. Make sure to visit ASO Mammoth for the best ski and snowboard rentals in Mammoth Lakes when you do!