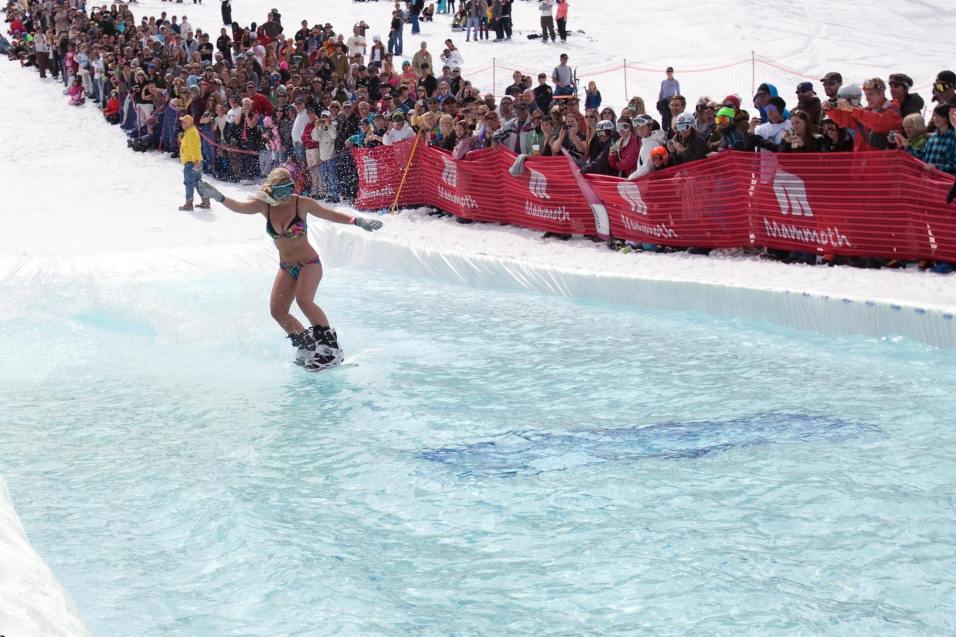 They say, “when life gives you lemons, make lemonade.” In Mammoth Lakes, we translate that to, “when the spring sun melts the snow, make a pond skim.”

If it were up to us here at ASO Mammoth there would be snow on Mammoth Mountain year-round, but we always love the Mammoth Mountain Pond Skim thanks to the wild costumes, fearless crashes, and massive splashes. If you didn’t make the pond skim this year Mammoth Mountain uploaded their entire stream to Facebook for your viewing pleasure and the team at ASO Mammoth is pitching in by listing and timestamping our favorite moments below.

If the sight of blue skies and spring snow makes you want to visit Mammoth Mountain, drop into ASO Mammoth on your way up for the best ski and snowboard rentals and gear in town!

That’s why we consider this couple a must watch!

Can’t decide between a snowboard or skis for the pond skim? Why not a little bit of both?

Actually, based on what happens when the Slalom Skier hits the pond we wouldn’t recommend it. We will recommend watching this contestant turn the pond skim into a summer event with their watersport costume though.

You always hear about the dangerous wildlife in Australia, but after watching this Australian contestant not only brave the freezing pond in only a speedo but also body slam a kangaroo, we think the Australians are doing fine.

Yes, you read that right, which is why this contestant is a must see.

It’s one thing to have an incredible costume for the pond skim, but the thing that sends this contestant to the top is their ability to stay in character and crush the post-skim interview as only The Macho Man Randy Savage could.

Plus, he was one of the few snowboarders who actually made it across the pond.

Sometimes things don’t go as planned, but that didn’t stop this contestant. They took the time to get an awesome ACME Rocket, strap a snowboard to it, and push it up the hill for the pond skim, only for the ride down to go off-course.

Still, we have to commend the effort put into this costume and no matter how long it took the rocket to reach the pond we couldn’t think of a better way to end the 2019 Pond Skim.

If you’re wondering what the difference between a splash and crash is, this crash is your answer. This contestant didn’t quite stick the runup to the pond and caught a mean toeside edge that sent her to the ground tragically close to the pond.

Our favorite part though, is that despite a hard crash she was unhurt and lived up to her name by taking a dive in the pond to keep the party going.