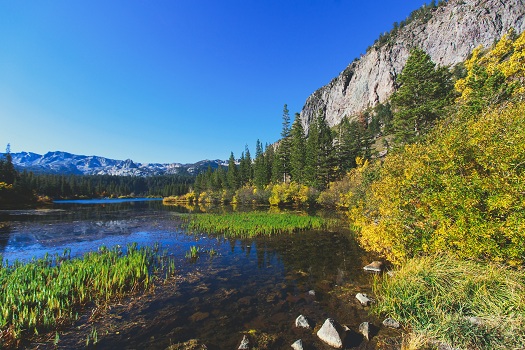 Because of the higher elevations in the Mammoth area, the fall weather here isn’t necessarily what you would automatically think of as typical California autumn weather. This is ultimately a good thing if you prefer cooler evenings and other conditions often preferred for fall and winter activities common in this area. Keep reading to learn more about what the weather is typically like in Mammoth during the fall and how you can enjoy it, brought to you by the mountain sports experts at ASO Mammoth, your year-round one-stop shop for everything from fishing and mountain biking equipment to ski gear and Mammoth snowboard rentals.

The first thing you’ll notice about fall weather in Mammoth is a drop in temperatures that usually starts in September. The average daytime high in this area from September to October ranges between 60 and 70 degrees. Nighttime lows during the same period often hover around the freezing mark.

Snowfall in the Higher Elevations

Mammoth Lakes gets an average of 93 inches of snow per year. Because of the higher elevations in popular places like Mammoth Mountain, it’s not unusual for real snow to arrive before winter officially begins. In general, temperatures are ideal for snowmaking by mid-November. This is why Mammoth Mountain usually opens for the winter season around this time. However, the bulk of the natural snowfall in the Mammoth area tends to happen after the holidays and through the middle of February. Snowfall in the higher elevations usually continues through spring, which typically allows Mammoth Mountain to remain open for skiing and snowboarding until at least Memorial Day weekend.

Preparing for Seasonal Changes in Mammoth

Fall in Mammoth means generally mild days and cooler nights. If this is when you have plans to come here, it can help to keep this in mind as you pack for your trip. You should be just fine during your fall trip to Mammoth if you bring the following things with you:

• A comfortable fall jacket, but it doesn’t have to be bulky
• A few sweaters, hoodies, or sweatshirts for the cooler nights, especially if you have plans to be out and about in the Mammoth area later in the day
• Jeans or other warmer pants
• A mix of lighter and slightly heavier clothes to be prepared for day-night temperature shifts

Things to Do during Fall in Mammoth

Mammoth Mountain officially kicks off its 2021–2022 winter season on November 13th, so a fall skiing or snowboarding trip is certainly a possibility. There are other things you’re welcome to do here as well when the temperatures start to drop and the days get shorter. For example, fall is also a great time to fish in this area. Mono County fishing season runs through the end of November, although some catch-and-release fisheries in the Mammoth area are open year-round. Autumn is also a good time to enjoy any of the following activities in this area:

No matter what time of year you visit Mammoth, you’re sure to have a fantastic time. Whether you’re here to fish, hike, bike, ski, or snowboard, drop by ASO Mammoth, where you can find everything you need to enjoy your time in the Mammoth area. If you need biking gear, fishing licenses, or ski rentals in Mammoth, our friendly team is here to help. Give us a call today at 760-965-3444.