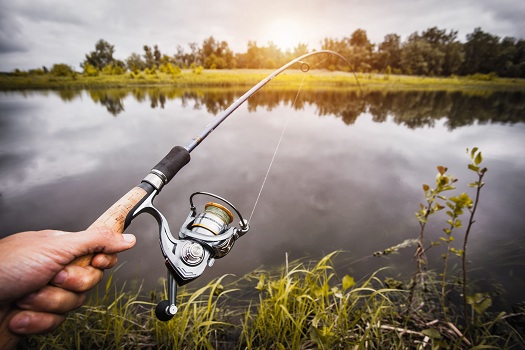 From the end of April through mid-November, fishing is one of the many activities you can enjoy in the Mammoth area. If this is one of your reasons for making your way to Mammoth, you may be wondering if certain fish you prefer can be found on the mountain. With salmon, the answer is technically “no,” but it can also be “kind of,” since trout—the most common fish species found here—is in the salmon family. Below, the friendly folks at ASO Mammoth, your year-round one-stop shop for everything from fishing equipment and licenses to mountain biking gear and Mammoth ski rentals, point out the types of fish you’re more likely to come across in Mammoth.

The waters in the Mammoth area are perfect for this fish species, which was imported from Europe. Larger and more aggressive than their rainbow trout counterparts, brown trout are often appreciated by anglers preferring more of a challenge.

In the char genus of the salmon family, brook trout aren’t native to the United States, but they can still be found in colder waters. In the Mammoth area, you’ll be more likely to find this fish in some of the streams and creeks here.

Part of the Mammoth Lakes Trail System, Convict Lake is where you’ll be more likely to catch some Owens suckers. Native to California, these fish have an affinity for insects, so artificial flies make for good bait if you wish to catch some of these fish.

Go on a treasure hunt of sorts by searching for the more elusive golden trout that can be found in the lakes in the Mammoth area. You’ll have to focus on lakes at higher elevations to have a better shot at finding golden trout. Still, it can certainly be worth the effort.

First discovered in California back in the 1960s, these fish are also considered a rare find. That said, this species of perch can still be found in the Mammoth area. Sacramento perch are more abundant in Crowley Lake, which is about 15 miles south of Mammoth Lakes.

Also hard to find in the Mammoth area, smallmouth bass can be a real treat if you manage to catch one while you’re here. If you’re a more seasoned angler, you may appreciate the search and fight that can be necessary to find and catch this particular fish.

Many species of salmon are saltwater fish, and trout prefer fresh water. This is the main reason these fish aren’t found together in the Mammoth area. But you can still try your luck at finding various salmon-like trout species and a few other types of fish during your visit here. Popular fishing spots in and around the Mammoth area include:

No matter which sport brings you to Mammoth, stop by and see the knowledgeable staff at ASO Mammoth. Whether they need fishing gear or high-quality snowboard rentals, Mammoth visitors can find everything they need at our store. Drop by on your way to the lake or give us a call at 760-965-3444.