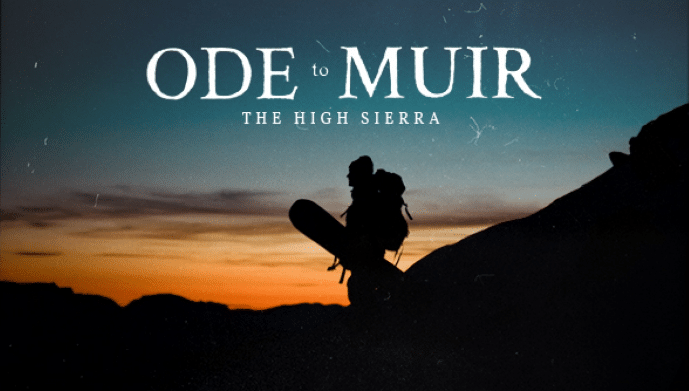 If you’re like the team at ASO Mammoth, you’ve had your gear laid out, your tune ups done, and are looking for anything that will help pass the time until there is more snow on the mountain. We’re keeping sane as we wait with a healthy diet of the best films from this year.

Here’s what we’re watching to chase away the early-season blues!

Even though Ode to Muir isn’t your average backcountry film, it might be the most important on this list.

With backcountry legend Jeremy Jones and Olympic Snowboarder Elena Hight riding through the best mountains the Easter Sierra has to offer in the John Muir Wilderness, you can bet that there is plenty of riding to keep you entertained. What makes this film different is that alongside the incredible footage and lines is a meditation on nature and our responsibility to preserve it for future generations.

What makes Ode to Muir even better is that if the snow isn’t good enough to ride at Mammoth Mountain, this film will have you ready to take an adventure into the nearby John Muir Wilderness which is only a short drive from the mountain.

If you’re not looking for anything close to a mediation and instead want thrilling riding, then Kamikazu is the film for you. The star of this film, Kazuhiro Kokubo, has the backcountry credentials of Jeremy Jones, but what makes him and this movie special is the insistence on breaking traditional form in search of something new for better or worse. Just take a look at the cast of riders, and you can see that this film isn’t about brands, styles, or names.

It’s simply about riding the best lines possible, which means hitting features and lines in ways you would never expect.

If you heard about Kokubo’s Olympic controversy then you know that riding against the grain is in his nature, so if you’re looking for riding and style that pushes the edge with the best riders in the world, check out Kamikazu!

The Future of Yesterday

Ode to Muir is ultimately about nature, and Kamikazu’s ground-breaking riding will blow you away, but The Future of Yesterday is simply about a group of best friends riding during the season of a lifetime.

Of course, it helps when that group of friends consists of some of the best snowboarders on the
planet.

The riders in The Future of Yesterday were not chosen by how hot their name was or who they rode for. Instead, the self-named “Cozy Bois” are simple a group of friends riding where they want, how they want. From the very start of the film where you see each rider quitting a ridiculous job, or in the case of Ulrik Badertscher just getting off the toilet, and finding freedom on the mountain with their friends, you know this movie shows the best parts of riding with friends.

If that doesn’t get you excited to ride, then what will?

Stay posted for more ways we are passing the time as we wait for the first storm of the year as well as tips and info on snowboard and ski gear, Mammoth Mountain, and Mammoth Lakes. If you’re planning a trip the Mammoth, be sure to stop by ASO Mammoth for the best ski and snowboard rentals on the mountain!