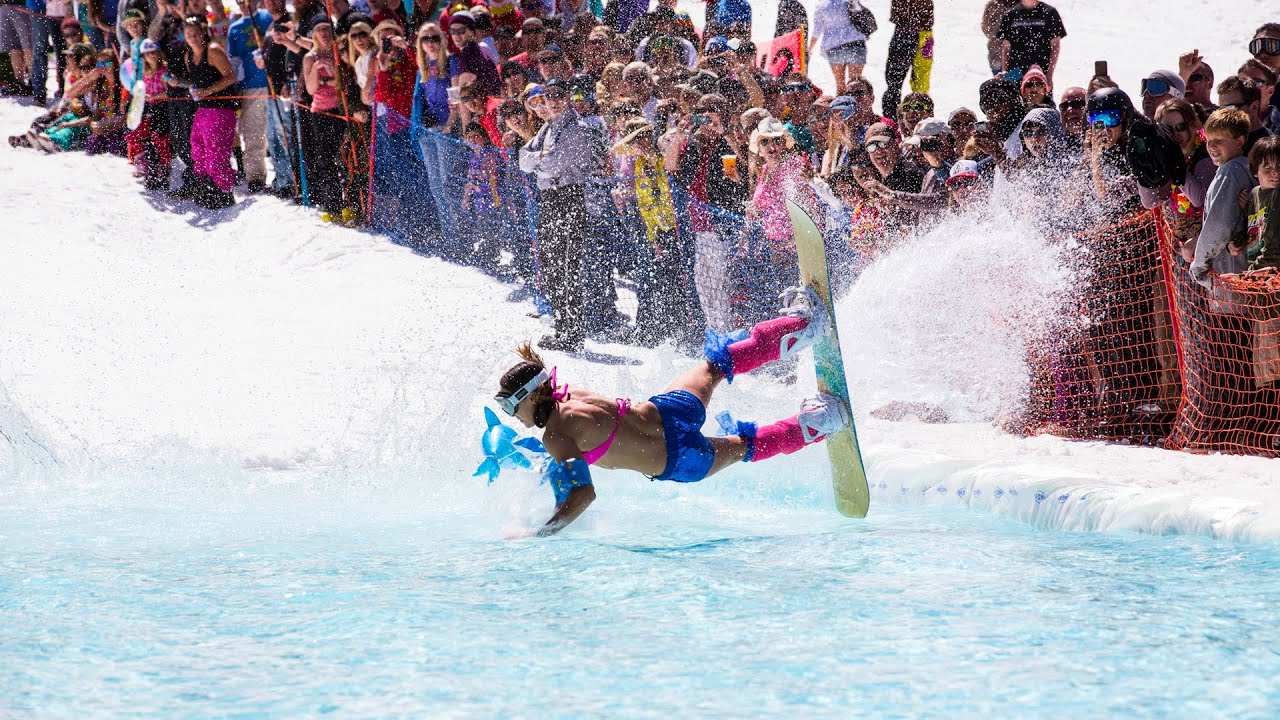 What you Need to Know About the Mammoth Mountain Pond Skim

It’s easy to love snow when you’re able to call Mammoth Mountain and all its terrain home. In fact, the Mammoth Mountain community loves snow so much that it doesn’t even have to be frozen for us to ski and snowboard on it.

Pond skims are nothing new, but the size and passion of Mammoth Mountain’s pond skim is like nothing else you’ll see in the mountains this spring. That’s why the ASO Mammoth team has put together a short guide to what you need to know about the Mammoth Mountain pond skim below. Check it out and then stop by the ASO shop for the best ski and snowboard rentals in Mammoth Lakes!

What is a Pond Skim?

If you don’t spend much time around ski mountains during the spring, then a pond skim may be completely new to you.

As much as skiers and snowboarders love winter, when spring temperatures melt the snow on the slopes ski mountains embrace it by creating a small pond near the base of the mountain and allowing riders to try and glide across it on skis and snowboards.

Even though making it across the water requires serious skill from skiers and snowboarders, most people are there to embrace the warm weather and fun atmosphere around the pond skim.

If trying to glide across cold water on skis or a snowboard doesn’t sound like your thing, don’t worry. Cheering on people participating is the best part of any pond skim, and thanks to the costumes participants wear and the warm temperatures the pond skim is one of the best parties of the year.

How do you Participate in the Mammoth Mountain Pond Skim? 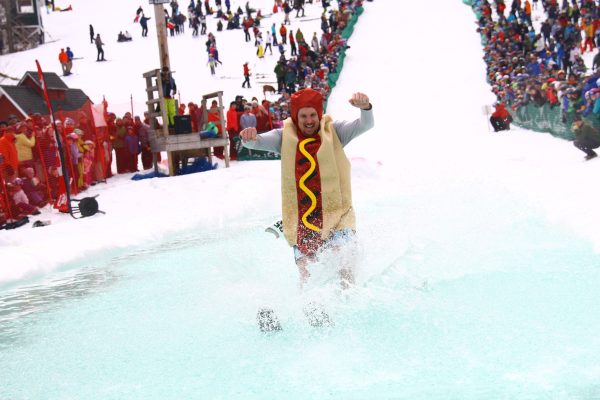 If cold water and big crowds don’t scare you and you want to participate in the Mammoth Mountain pond skim then you’ll have to show up early to Canyon Lodge on April 17th.

The first 50 participants to be in line at Canyon Lodge starting at 8 am will be given a spot in the pond skim. However, all participants must be wearing a costume to be entered into the competition. If you don’t wear a costume, then you will not be allowed to participate.

When does the Mammoth Mountain Pond Skim Begin?

If you’re not participating in the Mammoth Mountain pond skim, then you need to know that the actual competition begins at 2 pm on April 17th just outside of Canyon Lodge. You can watch from on the slope, near the pond, or from the lodge, but if you’re near the pond then you may get splashed as people crash into the water!

After everyone has had a chance to make it across the water, the real fun begins with an after-party starting at 4 pm.

The pond skim is one of the last events of the ski season, so make sure you make the most of the festive atmosphere! Whether that means pressing your luck on the water or cheering on those who do from the sidelines, you’re bound to have a blast at the Mammoth Mountain pond Skim!