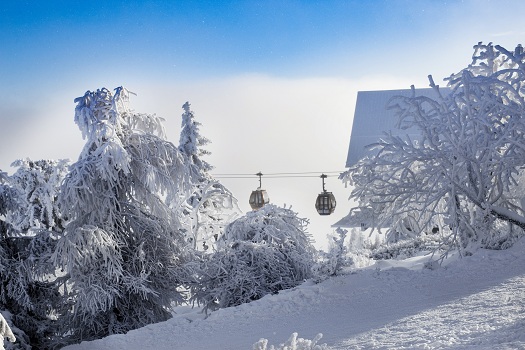 Mammoth Mountain is accessible year-round but probably best known as a go-to spot for winter-related activities. If you have plans to come to this popular resort to ski, snowboard, snow tube, or do anything else involving snow, you may prefer to have some snowfall details to keep in mind as you make your plans. Read on for a rundown of what to expect with snow in the Mammoth area, brought to you by the experts from ASO Mammoth, where you’ll find everything you need to have a blast on the mountain, from Mammoth snowboard rental to ski repair, waxing, and accessories.

According to Onthesnow.com, Mammoth Mountain has an average annual snowfall of nearly 300 inches. On average, there are 43 snowfall days here. Snow depth in the Mammoth area averages around 55 inches. At the top of Mammoth Mountain, which rises to 11,053 feet, the average depth of the snow is just over 100 inches. At the base, the average depth is a bit deeper, at 107 inches.

You’re not limited to the traditional winter months when looking to enjoy the snow at Mammoth. In fact, it’s not completely unheard of for snow to arrive early enough for the resort to kick off the skiing and snowboarding season in October. This is what happened in 2021, although it’s more common for Mammoth to open for snow-based activities in mid-November.

Snow Can Remain on the Ground Later into the Year

What’s also appealing about Mammoth Mountain is not being limited to winter for snow-related activities. Typically, Mammoth wraps things up by Memorial Day. There have been some years when the season was extended into June and even part of July, but this is more often the exception than the norm.

Temperatures usually dip low enough to start the snowmaking process in November to enhance the actual snow coming down. The more significant snowfall often arrives just after the holidays at the end of the year and continues through February. By the time March arrives, snowfall averages taper off significantly. In the Mammoth Lakes area, June is the last month when snow is seen locally.

Come Earlier in the Year for Deeper Snow

If you want what’s considered the “best” snow for skiing and snowboarding, you’ll likely find conditions you prefer earlier in the year. That said, the resort has it pretty much down to a science when it comes to maximizing the season for winter-related activities. In other words, you’ll likely find suitable conditions whenever the ski area is open and accessible.

Preparing for Your (Snow-Related) Trip to Mammoth

Whether they need last-minute snowboard repair or they’re looking for the best place to rent skis, Mammoth visitors can rely on the friendly folks at ASO Mammoth, the one-stop shop for everything they need to have a great time at Mammoth during every season. Stop by on your way to the mountain or give us a call at 760-965-3444.