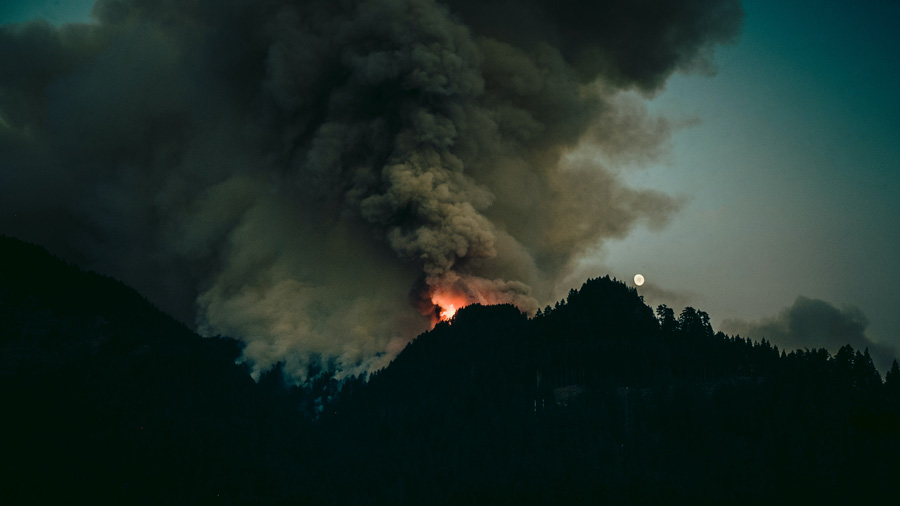 Remote, untouched wilderness is what most people are looking for when they head out into the outdoors, but the dangers of the wilderness can creep into popular parks, camps, and even cities on the wind through wildfire smoke.

All over California, people have been dealing with wildfire smoke whether they’re in a cabin in the mountains or in an urban loft. Here in Mammoth Lakes we’re no different as the Creek Fire has filled the air with smoke and bad air quality. To help anyone affected by wildfire smoke, the ASO Mammoth team has put together a short guide to staying safe in bad air quality. Check it out below and stay safe and healthy the next time wildfire smoke finds you!

You probably could have guessed that those with weakened lungs are vulnerable to smoke, but people who have experienced heart disease can also suffer if they breathe in too much wildfire smoke. Other vulnerable populations include those who suffer from asthma and children.

If you or someone you’re with falls into one of these categories, then it’s important that you keep an eye on the air quality index (discussed below) and reduce exposure to smoke as much as possible. Everyone should limit their time and activities outside when there is smoke in the air, but anyone especially vulnerable should be the first ones to head inside to avoid exposure.

You’ve probably seen AQI values included in your daily weather reports before, but when there is wildfire smoke in the air they become important tools for staying healthy. You can find AQI reports on several different weather sites and likely even the weather app on your phone. Generally, any AQI under 50 is good air quality with anything between 50 and 100 being considered moderate. Once you get above 100, those sensitive to lung and heart disease as well as the young should consider spending time inside as the air is unhealthy for sensitive people. AQI above 150 will likely affect even those who are not sensitive to bad air and affect those who are even worse. Although most people should stay inside when the AQI is above 100 even if they’re not sensitive to bad air, any AQI above 200 could result in serious health effects for anyone spending time outside.

Keep the Air in Your Home as Clean as Possible

You can avoid bad air by going inside, but if you don’t close your windows and other points of entry for outside air then you’ll still be affected by bad air outside. Closing your windows may seem obvious, but it’s also important that you preserve the air you’re breathing by not lighting candles, frying or broiling meat, smoking, or vacuuming inside. You can also protect yourself by spending time in rooms away from windows, doors, and fireplaces. Lastly, invest in a portable air cleaner and efficient air filters for your air-conditioning systems. During wildfires, there are often times when the air outside will improve momentarily. If you’re indoors, use the periods of good air to clear out any pollution that may be stuck inside.

Don’t Forget About Your Pets

Even if your pets are begging to go outside, they can be affected by wildfire smoke just like we can. If the air quality is too bad for you to be outside, then limit your pets time outside as much as you can to keep them healthy. Also, make sure they spend time in well ventilated areas of your home.

Read more how the California Wildfires have affected Mammoth Lakes.